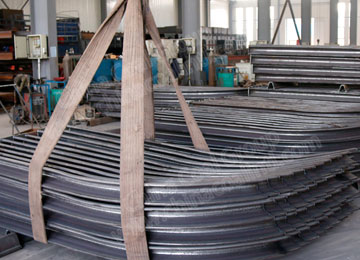 The scalability of Flat Net Shell Support comes from two aspects: (1) the contact of the spatial grid steel supports and surrounding rock itself has certain yielding; (2) the junctions between the ret

Supporting of soft rock tunnel excavation has been one of the key technical problems which affects the further development of coal industry production and construction of our country . Deep mine ground pressure intensity is high, under the condition of mining influence and impact ground pressure and strata control is especially difficult, thus support system is more and more strengthened, such as the need to reduce the frame from u-shape set, strengthen the link rod, and even to use U36 steel;spray the anchor net supporting to reinforced by steel arch, or and anchor rope combined support, surrounding rock grouting, etc; Although this can achieve certain supporting effect, but support cost is very high. Therefore, China coal group design to create a new type of flat net shell components, the main supporting characteristics of flat net shell components summed up as: "while digging, while supported edge, before soft to hard, enough stiffness, process simple,low price."

1,"While digging, while supported edge",timely support

Flat Net Shell Support can use waste rock filling, grey package after wall, concrete precast slab, such as filling, network frame and the tunnel contour quickly close to stick, while digging, timely support, so that on the one hand can make the support resistance of support was able to play in time, to timely reinforce the surrounding rock and to work under the stress state in three; On the other hand, have the effect of slow pressure, pressure, lead to the uniform support along the perimeter stress, is in good working condition.

Flat Net Shell Support force has a complex ingredients: expansion and creep of rock mass, reduce the strength of long, crushing of rock mass adhesion coefficient reduced values, etc., all show the macroscopic displacement of rock mass and any rigid support to prevent displacement will be entirely itself in disadvantage. Therefore, the stability of the laneway to end support, work together to complete of the surrounding rock. Reticulated shell scaffold, while under high in-situ stress reaction in surrounding rock, making convergence of surrounding rock in supporting under the control of convergence, by stent supported edge, the edge of broken rock mass convergence pressure unceasingly, forming a stable bearing ring, together with stents to assume the role of in-situ stress.

(1) the contact of the spatial grid steel supports and surrounding rock itself has certain yielding;

(2) the junctions between the reticulated shell scaffold piece and piece of wood plate.

1. With the traditional metal brackets or steel arches as the reinforcing ribs of concretes shotcrete layer. The large bend produced within the shotcrete layer needs to be strengthened. For spayed layer, the semi-rigid reinforced shell structure not only improves its carrying capacity but also eliminates its internal bending force.

2. Flat Net Shell Support transformed passive support into active support which has greater supporting resistance as well as great flexibility. And its feature, "before soft to hard" suits the basic idea of soft rock support.

4. The use of Flat Net Shell Support shows that the new technology, with features of safe operation and feasible process radically changed the situation that some roadways need regular maintenance or repairation.

5. The successful application of the Flat Net Shell Support provides successful experience for soft rock support. According to the technical&economic analysis of Zhangji Coal Mine, this new type support structure has the features of reasonable structure design, high integrity, the ability to resist the large deformation of roadway. And compared with the heavy-duty U steel support, the new shell support can save 40% of the steel and reduce the direct costs by about 30%. So it can be applied widely in high stress and soft rockmass roadway.